Visualizing the OpenCog AtomSpace in a useful way is a complex matter and many different approaches may work well for different purposes. There have been several attempts to build AtomSpace visualization tools over the years; none have been particularly successful.

There are three basic classes of visualization tasks that are important for using the AtomSpace.

For a multi-user system published on the web, something like Jupyter notebooks might be better. But we would need Jupyter for scheme (guile) code. And we would need to be able to version-control it. Something called "nbstripout" might be just the thing!? Solving this is not really urgent, until we get to the point of having two or more people collaborating on a science project.

Some things that a visualizer should do:

Some older specifications and ideas for how visualization could be performed:

Things worth looking into:

The AtomSpace Explorer was (as of October 2017) a very promising visualization tool. This was adapted from the Mozi_Visualizer demo, which in turn was based on the former Glimpse visualizer. See the README file for instructions on how to install and use the AtomSpace Explorer.

Unfortunately, it has bit-rotted. It uses an obsolete Atom layout, and the API it uses to access Atoms is dead. It looks pretty cool from the demos, but needs a total overhaul. Interested readers are encouraged to bring it back to life.

This is a specialty tool for working with and annotating genomic data stored in the AtomSpace. See https://github.com/MOZI-AI/annotation-service

A related component is the Gene Ontlogy Visualizer. See https://github.com/Habush/annotation-graph

The Gephi code below sounds cool but it seems to have disappeared. No one knows where it went. The Dotty and Tulip visualizers were weekend hacks that never did anything fancy.

Visualization using Gephi is integrated with the CogServer using Python.

Steps for use under Ubuntu Linux:

Generates dotty graphs. You probably want to use it with GraphViz. See https://github.com/opencog/visualization

This tool is implemented using HTML5 and JavaScript. Bit-rotted. See the "obsolete" subdirectory in https://github.com/opencog/external-tools/ 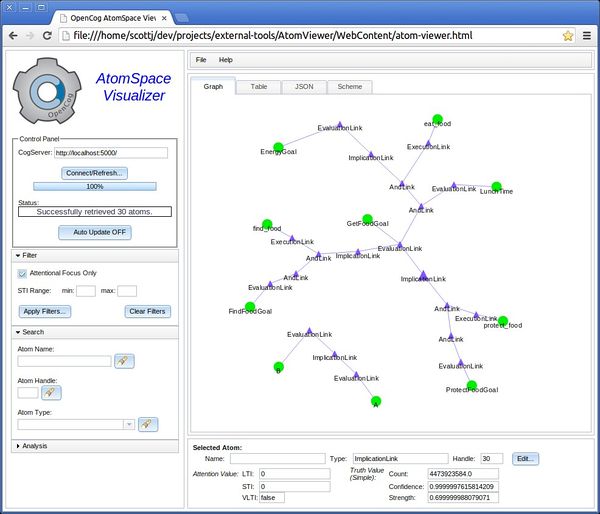 See the "obsolete" subdirectory in https://github.com/opencog/external-tools/

In order to map Atoms into existing graph visualizers, one must map the OpenCog hypergraph into a conventional graph. Code that does this was written by Junfei Guo in 2008, and is in a rar file here: File:UpdateFinalEvaluation.rar.