This page semi-formally gives some ideas related to spatial and spatiotemporal relationships. Not all are appropriate for immediate implementation at the time of writing. The document is written specifically in the context of the OpenCog HK project and its 3D Minecraft-like game world, though many of the ideas are more broadly applicable.

By an “entity” here I’ll mean a “physical object” (e.g. in the game world ), which may be an object created in 3dsMax or similar and imported into the game world, or may be a block, or may be a construct from blocks (like a wall or a step, or a house, or the wall or the roof of a house, or a table, or a whole staircase, etc. etc.).

Any entity may have many different properties, and ultimately the system should learn new properties. For now I’ll just suggest some simple properties and some others that may be derived from them…

Some elementary properties, that we may want to supply for starters as “canned” procedures:

Some other “secondary” properties that I think we can express as logical combinations of the elementary ones:

I’m thinking that these secondary properties can be defined explicitly in the Atomspace, rather than via canned schema. The conceptual idea here is that

In this approach, for example, Towering becomes something like

which is most meaningful in contextualized form,

Next, what about relationships between entities?

One reasonable way to start thinking about spatial, temporal and spatiotemporal relationships is to look at common prepositions (ideally cross-linguistically, but it turns out these are not so language-dependent, so looking only at English isn’t a large loss). For interest, a relatively complete list of English prepositions is here] and a shorter list of prepositional relations that appear likely applicable in the present context is:

across, against, along, amidst, among, apart, around, behind, beside, between, in front of, inside, into, near, next to, out of, outside, through, together, toward

above, atop, below, beneath, over, under

after, before, during, since, until

A couple others that seem useful for handling English conversation are:

Similar to with entity properties as considered above, it seems that a few relationships may be defined as primary, and the rest considered secondary defined in terms of them. More on this later!

Relationships Between Parts of Entities

Some important relationships between an entity and the sub-entities that are parts of the entity are as follows:

It seems that many of these can be treated as secondary, and defined simply in terms of others.

For example, Top_of might be roughly, initially defined as

Rather, they are intended as initial conditions for learning, so that the AGI system can build its own concepts on top of them, eventually using its experience to capture many of the subtleties implicit in the commonsense human understanding of related concepts, and some subtleties of its own invention as well.

The right way to define these relations in terms of primitive concepts won’t always be obvious; and there may be many routes. For example, one could define “interior_of” X as meaning “part_of X and NOT next_to Y unless X is also part_of X”; and “boundary_of” of X correspondingly…

The material in this section is probably not needed for near-term implementation in the OpenCog HK project at time of writing, but is included here for interest and future applicability.

Another approach to spatiotemporal relationships is founded in mathematics rather than linguistics. There are well-known mathematical systems for representing such relationships, which are elegant and easy to work with computationally. These systems tend to ignore uncertainty, but in my prior work I have extended them to include both fuzzy and probabilistic uncertainty.

As a side note, the relationship between these mathematical systems and human cognition is unclear to me. Clearly humans can handle all such relationships both implicitly and explicitly, but some may be much easier for us than others, whereas these relative differences in difficulty are not apparent from the mathematics.

The most traditional and well-developed theoretical framework for systematizing the qualitative relationships between time-intervals is Allen’s Interval Algebra, or simply Interval Algebra (IA). IA, in its original and simplest form, models temporal events as intervals, that is, processes that have a beginning and an end in time. Based on that, thirteen temporal relations may exist between any given pair of events. The following figure illustrates those relations with a simple bar representation for intervals: 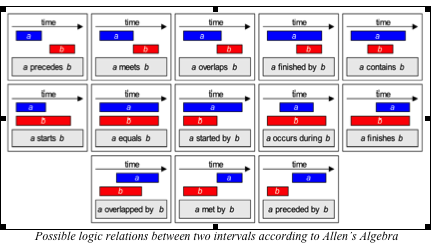 There is a calculus that defines possible relations between time intervals and provides a composition table that can be used as a basis for reasoning about temporal descriptions of events. Note that in the AI approach, time intervals are not necessarily represented by precise endpoints, but rather by their relationships.

The most direct analogue of IA for space instead of time is the Region Connection Calculus (RCC). The basic entities modeled by RCC are regions (as opposed to points), assumed to be embedded in the same space of some dimensionality (e.g. 2D in the most commonly considered case). The basic relations in RCC are defined in terms of connection or inclusion between two regions of the analyzed space. The number of possible relations varies according to the “granularity” of the RCC variety being used. The “coarser” variety, RCC8, is thus called due to the set of just 8 primitive relations that define it:

which are depicted in the following figure: 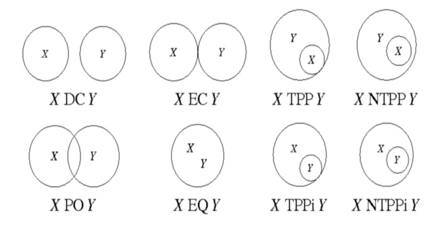 From these basic relations, combinations can be built. For example, proper part (PP) is the union of TPP and NTPP.

As an example, here is a network illustrating some RCC relationships between some regions in a fictitious city:

RCC8 comes with a complete composition table embodying all such possible inferences.

There are also extensions of RCC enabling it to deal with more complex situations, such as for example RCC23 handles convex regions. We suspect that RCC8 may be adequate for the initial Icarus test problems, but it’s also possible some benefit could be achieved from RCC23, in spite of the added complexity.

Finally, the above relationships are defined for 2D, but all of them also apply to 3D perfectly well. There are some recent publications on RCC-3D that pursue this in detail. (Julia Albath, Jennifer L. Leopold, Chaman L. Sabharwal and Kenneth Perry (2010). Efficient Reasoning with RCC-3D. Lecture Notes in Computer Science, 2010, Volume 6291/2010, 470-481 )

An issue with RCC and IA as traditionally formulated is that they are crisp, i.e. they don’t admit any uncertainty. They don’t let you talk about one interval being almost after another one, nor about one region being almost next to another one. In a forthcoming book entitled Real World Reasoning (and much more briefly in a paper published in the proceedings of the AGI-10 conference), my colleagues and I have explained how to add fuzzy and probabilistic uncertainty to the RCC and IA relationships, thus obtaining an uncertain calculus of spatial and temporal relationships.

It would seem that in order to get good use of IA and (especially) RCC for the OpenCog project, implementation of uncertain versions would be necessary. It would be fairly straightforward to implement this mathematics in the OpenCog system, but this work hasn’t yet been done.

Another interesting question is how to represent complex objects in terms of primitive objects. Some conceptual guidance here is given by the theory of image grammars, a conceptually interesting (though not yet that practically successful) approach to image understanding. The following figures are drawn from Zhu and Mumford’s paper on stochastic image grammars (Song-Chun Zhu and David Mumford (2007). A Stochastic Grammar of Images, Foundations and Trends⃝R in Computer Graphics and Vision Vol. 2, No. 4 (2006) 259–362). The first ones illustrate “parse graphs” for a picture involving a cat and mouse; and for a car. The next one illustrates two parse graphs for clocks. The next illustrates an AND-OR graph for a clock, which incorporates both of the parse graphs into a single graph. Commentary follows. 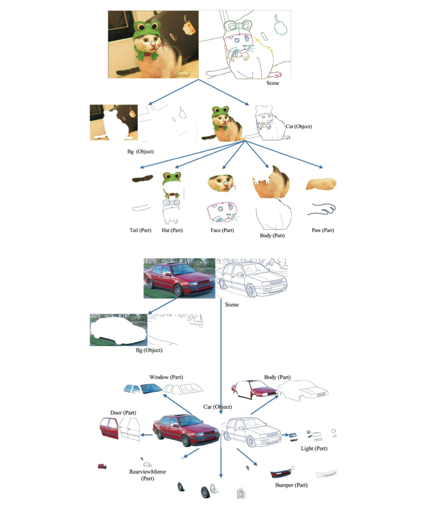 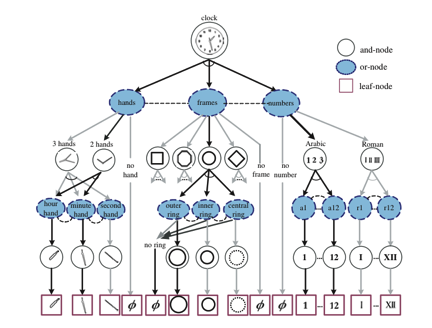 To the reader familiar with OpenCog’s knowledge representation, it should be obvious that these parse and AND/OR trees can straightforwardly be represented in terms of ANDLinks, ORLinks and part_of relations.

How, then, do we decompose an entity in the game world into component parts? How do we build Atom structures corresponding to parse trees or AND/OR trees of entities?

In the case of entities imported from 3dsMax or similar, the decomposition basically has to be human-defined. Otherwise one would have to do image processing on the screen renderings of the objects.

The interesting case is entities composed of blocks, or combinations of blocks and other imported constructs.

Some criteria that seem relevant are:

The easiest compact way to summarize these various cases (and others) seems to be: If the system’s mind identifies a simple predicate P so that (either always or during certain intervals of time):

then maybe it makes sense to consider G an entity, and distinguish it via an Atom (probably a SpecificEntityNode).

The question then becomes what predicates P the system is oriented to look for. Predicates related to some of the above examples would be: