The system described here is obsolete.. The code for this was removed from github circa 2015. This page remains as an archival page, showing what used to be. See SpaceServer for the current code.

The SpaceServer is an efficient way of storing and accessing information about where Atoms, associated with real/imaginary objects, are located in a spatial frame. The SpaceServer is specifically oriented to spatial domains where there is a global coordinate system (e.g. a simulation world, a video game world, or the planet Earth as viewed by an agent with a GPS system).

The currently implemented SpaceServer uses hash tables. At some point, if performance proves inadequate, it will be upgraded to the design below.

The SpaceServer design suggested here is based on octrees and quadtrees. Before reading on, you should look at the wikipedia pages, unless you are familiar with these data structures.

For the AI Skeleton we will only need the Quadtree part. However, to deal with birds usefully we will need the Octree part as well. Also, dealing with dogs that can navigate up stairs, through multi-story houses, etc., will be annoying without the 3D map (one can of course handle this without a 3D map, but it would likely add more complication than just making a 3D map.) In short, the Octrees are necessary for capturing the 3D structure of the world.

Note that the simple hierarchical structure of the SpaceServer matches naturally with the hierarchical perception architecture suggested in the Novamente book (which matches nicely with what's known about perception in the human brain, see e.g. Jeff Hawkins' book _On Intelligence_ among many other sources).

We considered using R-trees in the SpaceServer, but they turn out not to meet the needs of TangentBug very well (compared to quadtree/octrees, they would make TB both more complicated and slower); and looking further ahead, the simpler hierarchical structure of quadtrees and octrees fits in better with the OpenCog design.

A nice GPL implementation of Octrees is given here (well the API is nice, I didn't look at the code ;-p ...

(and the author indicates he might be flexible about licensing); however, that implementation does not provide all that we need either as a data structure nor in terms of the API.

I am not sure whether it would be easier to modify this code or just start from scratch. But in any case this code is worthy of study.

Each LocalSpaceMap is defined by:

In the OAC of simple, single-avatar system we only have one LocalSpaceMap, corresponding to the single avatar at the current time.

In the OAC of a multi-avatars-per-process system, we would have multiple LocalSpaceMaps inside the same SpaceServer.

In the CES, we would have multiple LocalSpaceMaps corresponding to the world-images collected by multiple avatars at multiple times. (In this context, there could be process that merged adjacent or overlapping LSM's into single, larger LSM's. But we can worry about that later.)

In the CES, we will want to be able to search the SpaceServer by time as well as space (e.g. find all LSM's corresponding to this region of space, during this interval of time). This requires the LSM's to be indexed by the TimeServer, just like any other TimeStamped entities.

Internally, each LocalSpaceMap is an (octree, list of 2DMapTree) pair, with details as described below.

The octree corresponds to a particular 3D region of space.

(Note of course that ground level may vary in its absolute z-coordinate, because there may be hills and valleys, and slanted ground.)

Other 2DMapTrees in the array correspond to "quasi ground level" in that particular 3D region of space: for instance, the floor of the second story of a house.

Basically, if the avatar finds itself on a reasonably large flat surface that is vertically _above_ the ground level, then it should construct a 2DMapTree corresponding to that surface, based on the information in the octree.

For the AI skeleton, we will only deal with the main ground-level 2DMapTree. But for PB 1.0, it may be hard to avoid the other ones, if we want the avatar to successfully navigate multi-story buildings, and recall its information about this effectively in the CES.

Each leaf node N in the quadtree should contain an EntityStructure, consisting of a list of tuples of the form

The lists should contain only entities whose perimeters intersect the spatial region defined as follows:

The jumpHeight int corresponding to EntityID E indicates how high the avatar will have to jump to get over the obstacle corresponding to the part of E in that cell. If there is not room for the avatar to jump (e.g. if there is a solid wall there, or say a wall with a tiny window), then the int can be null or negative or whatever (;-p).

The int whichSide is used to indicate whether the given cell constitutes the front, back, right, left, top or bottom of the entity. (This is used by predicates like nextTo). All these directional qualities are to be judged from the entity's perspective, not the observer's.

For the AI Skeleton we can ignore jumping and whichSide, but they need to be considered for PB 1.0....

These are actually simpler than the quadtrees, as jumping doesn't need to be explicitly considered.

A leaf node contains a list of EntityID's of entities that intersect the voxel (cell) corresponding to the node.

A non-leaf node contains the merger of the EntityID lists corresponding to its children.

returns all object IDs that are within =radius= of the given position position.

Returns the nodes that contain Entity objectID at a given depth of the tree.

I need to be able to look up the center of an object, given its ID.

Given a grid cell, I should be able to query for its coordinates within the quadtree. Ben indicated that this method will return four corners, each having integer coordinates.

This method will determine whether a given region is free of obstacles. If a section of the map is not known, this method should assume it to be empty. It would be useful but not essential for this method to also return the point where it failed (the first point that turned out to be occupied). The rectangle does not have to be parallel to the x and y axes.

I think if it's no more trouble,

would be better for the future--we hope that Moses will be able to experiment with navigation algorithms in the future.

This method returns a ray (not normalized) pointing from the given point to the nearest object. If there are no objects in the map, I'm not quite sure what this should do. Note that the ray that is returned does not point to the center of the closest object. It points to the closest occupied cell at the maximum tree-depth (maximum resolution).

The main things we need here are:

Note that it's not important to exactly find all entities in the circle of radius r. Approximating the circle with squares fairly crudely is just fine.

Class Entity holds a position and bounding box of an object in a virtual world.

The outside perimeter of combined objects may be used for 2D navigation in a virtual world. See image of overlapping Entity’s forming the SuperEntity (SuperEntity.png). 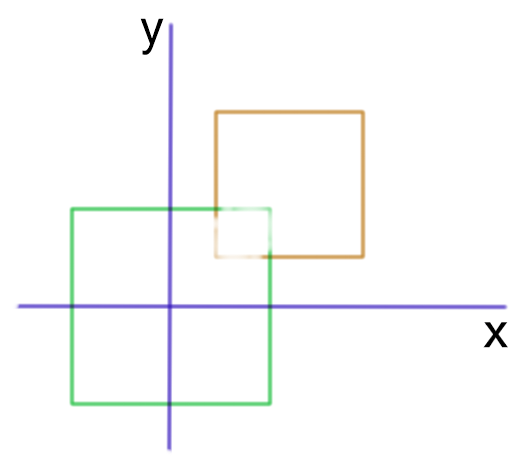 As for 2D, the main things we need here are: