A number of authors recently have made an argument that human cognition operates, in part, via quantum logic rather than ordinary Boolean logic. The oeuvre of Dirk Aerts is a place to start if you're curious:

Note that this line of thinking is quite distinct from the hypothesis that the human brain operates via "macroscopic quantum dynamics" in the sense of physics. It's possible for the brain to operate via quantum logic, even without any quantum-physics dynamics going on; one of the points made in the literature is that sometimes quantum logic is the best way to describe a classical-physics-type system, from the point of view of some observers. In essence, the argument is that quantum logic is what an observer should use to reason about aspects of a system that the observer has reason to assume they will never observe. I'm planning to (sometime in the indefinite future) write a paper summarizing these arguments and giving my own twist on them. But right here I'm going to do something simpler: explain how one might implement simple quantum-logic reasoning within OpenCog…

Note that the link-grammar and/or operators are not boolean, but rather an exclusive-or, and a mandatory-join requirement -- its like vending-machine logic: for $1 you can get a candy bar OR a soda, but not both. The OR here is an exclusive-OR, not a boolean-OR.  The "logic" that describes this is called "linear logic".  Curiously, "linear logic" is exactly the logic of QM ... The John Baez "Rosetta Stone" paper helps explain why.

From the category theory point of view, linear logic is the internal language of symmetric monoidal categories. Such categories describe both QM and link-grammar (as a special case of categorical grammar). (Well, actually, that's not quite right- in linguistics, they're actually not symmetric; they're actually "non-symmetric compact closed monoidal categories", see pregroup grammar for details. The general ideas still apply, though.)

This is part of a broader set of topics that include "Kripke semantics".

Note also that modal logics and intuitionistic logics are handled in this framework. Rejection of the law of the excluded middle leads to systems such as answer set programming (ASP), which currently have extremely fast implementations thanks to the DPLL algo and the general boolean-SAT solver technologies. ASP is excellent for solving constraint problems, and having some ASP-like solver in opencog would be an excellent addition. The point here is that one does not have to necessarily move to complex numbers in order to get the benefits of a more rigorous insight into alternative logics.

We may start with the introduction of TruthValue objects whose strengths are complex numbers. We might want

Conversion of a ComplexNumberTruthValue to a SimpleTruthValue is straightforward on the face of it: just take the norm of the complex-number strength of the former. But as we'll see below, subtler approaches may be desirable in some cases.

A standard quantum logic type approach to doing quantum reasoning in OpenCog would be as follows.

indicating that A is a member of S with truth value q.

We may consider an Atom S as a vector in a complex Hilbert space, where the value of S in the coordinate A is the truth value of the QuantumMemberLink indicated above. Thus, an Atom with QuantumMemberLinks is a sparse representation of a quantum state vector.

All that is "straightforward." Beyond that, there are two different possible approaches. One is more standard (in terms of quantum logic), the other appears perhaps easier in an OpenCog context.

We then may introduce Links of the form

These indicate the meet and join operations on the lattice of subspaces of complex Hilbert space.

This much is OK. What gets trickier is trying to define the analogue of logical implication, and PLN deduction, for quantum logic. Referring to

note that there are 5 forms of quantum implication (which all reduce to classical implication in the case of a Boolean algebra). There is a neat trick (shown on that page) for unifying these into a single type of implication, but it appears to me that this trick won't be useful in the case of inference involving implications with uncertain truth values.

So we would need

Working out uncertain truth value formulas for each of these is a tractable but tedious task. Then there are combinational inferences to think about … what can we conclude from

for each case where i and j are unequal? Also, we need uncertain truth values for casting each type of implication into each other type.

A simpler approach is given by Saul Youssef's more eccentric (but fascinating) "exotic probabilities" approach to quantum mechanics,

In accordance with Youssef's approach, we may define 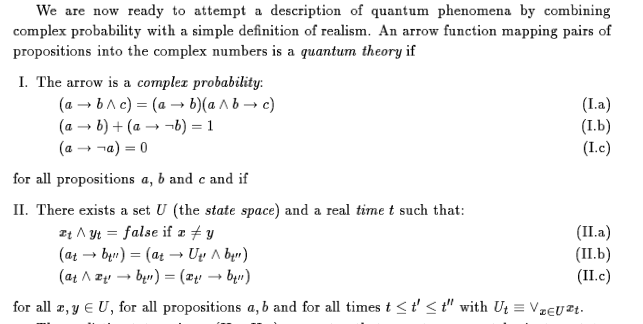 Yousseff's subscript _t is equivalent to an OpenCog atTimeLink, i.e. his

means the same as

In Yousseff's approach, we can consider

to mean a complex-number, quantum version of

The beauty of this approach is that the existing PLN truth value formulas can essentially be ported wholesale to QuantumImplicationLinks. Because the derivation of these formulas is based on the rules of probability theory, which complex probabilities also obey. Some of the heuristics used in some of the formulas may not make sense in the quantum context, and may need to be tweaked, but no deep or wholesale changes should be needed. On the face of it, it seems this makes the exotic probabilities approach to quantum inference much simpler to implement and design in detail than the quantum logic approach, which would require a lot of new math to derive inference rules and truth value formulas.