The goal of this project is to develop an interface to Opensim for OpenCog, via AGISim via RealXTend and/or LibSL. In the past I have worked on learning to control agents in Second Life using LibSL, and have developed agent like objects in both Second Life and OpenSim. RealXTend provides for both server and client side scripting allowing a potentially easier way to implement and interface between AGiSim and OpenSim using RealXTend as a proxy. In addition, RealXTend supports Python, which is one output form for Yield Prolog (a system I am integrating as an OpenSim scripting language). Such a combination would allow use of a Prolog specification to perform task/action/behavior decomposition within the proxy.

Initial plan includes - Setup, compile and run the existing AGISim or other OpenCog related sim interfaces. - Setup, compile and run the existing RealXTend (already running client and server working) - Catalog the functions supported by AGISim and produce a map between AGISim concepts and OpenSim concepts - Specify and implement an RealXTend script for each functionality requiring mapping - Specify and implement an AGISim agent proxy that uses RealXTend instead of the local simulation - Develop an equivalent environment to AGISim in OpenSim and/or RealXTend server - Verify the perceptual equivalents between the two simulations and note differences and/or possible extra info (higher/lower fidelity or resolution) - Write up and release

Other possible courses may include direct usage of OpenSim by LibSL or equivalents, or modification of OpenSim to make interface easier. The inclusion of an agent like OpenCog as an NPC option is highly desired by the OpenSim community and has longterm potential for both projects. A possible sideffect may be the ability to use OpenCog on all RealXTend supported grid types ( Opensim, Second Life and RealXTend servers).

Currently looking at LibSL. Most Open Second Life projects use it, and it defines the protocol and capabilities of the avatars. Testclient provides basic functions and examples of the possible avatar actions an how they are implemented. At a minimum it will provides a base set of functions. Now the question is how to map the SecondLife avatar functions in to something OpenCog can understand and use.

Theme of building infrastructure. Over the next week I should receive a new quad-core machine to run both the client and OpenCog on. So postponing getting OpenCog running until then, which should be its home.

The theme of the week has been collection and prep for the new processor. Should spend the weekend moving things over and into it. The big time sink was a performance issue with Opensim which took a two days to find a work around.

Recovering from the DDOS attack and hard disk crash took far longer than expected. However the end result is all processes have been moved to the new processor. The new processor appears to handle the load well, loading the different processes into a different core. Where the previous system was thrashing the new one rarely breaks 30% utilization. This is partially due to the improved graphics processor, with also supports CUDA parallel processing (a C programmed SIMD model). Looking at a spreading activation / Pagerank implementation in CUDA for another project. Intermittent crashes affected usability until a means of forcing the GPU cooling fan to 100% was found. Once done the system became very stable.

Currenlty running an instance of ResearchCyc on the system, and examining how OpenSim information would be ontologized. An example would be wearing clothing.

So one representation would be:

Or something like that assuming the other elements like MyBot, OpenSimBot, MyShirt etc are properly entered. At least enough informtion should be transfered to allow a controling bot to generate something similar. Enough exists to generate a logical form like this as a report, it just requires proper encoding. 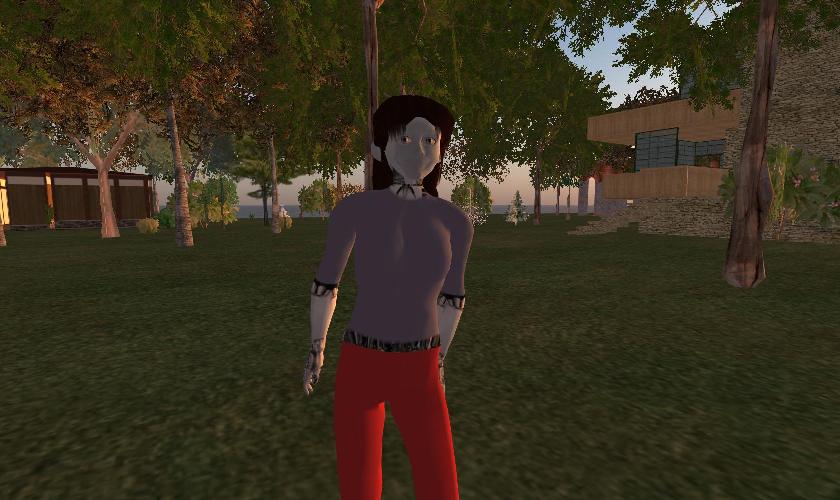 Post card from the Sim ... A bumpy ride but all survive. And all those fuzzy green obstacles to avoid.

Given the Petaverse examples I modified the Avataron Bot client to start accepting external commands given via XML. The commands were stored in a web accessible file, and the Avataron is given the URL. The one problem is matching the nested XML format with the test client flat-text format. Using the C# System.XML library I was able to parse out the information, and construct the final command at the close of each ‘action’ tag. This for each action-plan the system executes each sub-action sequentially. This works for many situations, except those actions of long duration, like ‘follow <avatar> ‘. Also the way follow is executed in the example client results in eventual stack overflow due to recursion (though it should be tail optimized…) So to properly operate the system requires a multi-threaded queue system, with the ability to do more complex processing other than immediate execution.

The current idea under consideration is to use a multi-threaded task processor with embedded interpreter. The actions get translated into an intermediate task language and put on the processing queue. As they are completed they eithr just perform their internal operation/update and quit or they write their messages back onto the message queue to inform the client AI program.

This leads to two steps:

After a search I found DotLisp [DOTLISP ] , a smallish C# lisp/scheme interpreter that reuses the existing C# types and connections with code without FFI . Given a definition of a task in lisp, the task manager evaluates each task calling the required bot control code, and returning the proper response and dequeuing when done. Not only does it allow direct commands to be implemented, it also allows the system to have a predefined library. Also the tasks submitted could be more complex.

One area minor area that came to mind was translating between xml & lisp, and a very simple format presents itself.

In xml would be represented as

Which would be fairly easy to transform either the Petaverse based input into, or allow other systems to write directly. Actions can defined as defined functions, and these functions can be updated over time. Once the s-expression is handled by the reader, the evaluatable object is added to task queue. After evaluating each task the task manager checks if the task signaled that it needs to be reinserted in the queue.

Connecting DotLisp to the client went fairly well, requiring only a few mods to help the interpreter disambiguate the preferred classes to use for references to IEnumerable and IEnumerator and the like.

The current client object is passed into the system allowing all of the existing methods to be called.

To have the bot say something in world would then be

Or from a file:

Created a simple class called subtask, an instance of which is passed in

so by default the tasks are one shot. However the code can manipulate the flag and any other property of thisTask, and thus signal that it wants to be repeated.

If the actual code is part of the subtask record then the system can manipulate what is executed from timeslice to timeslice. An if a handle to the task queue is passed in then it could create new entries and effectively “spawn” sub tasks. When done it should make be a nice nano-os pattern…

The subtask object currently contains the original lisp code string, the codeTree from converting the code into an evaluatable object, the results of evaluation and the requeue flag. The manager implements simple round robin processing, and sleeps between each task evaluation. It reuses a common task interpreter that is preloaded with the library of support functions. After each evaluation the system checks to see if the code string has been changed and if it has, it “recompiles” it if the task is marked for requeuing.

A few questions come to mind:

You would make the appropriate changes for your bot. SimURL is the sim the system will login to, and the tcp port and address are the ports the system listens for commands on.

Depending on the build or run options you use.

The key parameters to change are

Once started you can fill in the login parameters using the login form. Any changes there will be saved to the config file (which will be created if it does not already exist).

New: <startupLisp> allows an initial Lisp expression to be evaluated after the task manager starts executing and has loaded its boot files.

Since Cogbot is based on TextSL, you can drive things manually. You can start the system by executing:

The menu system is fairly simple for now

Under "Client->Login" is a form for modifying the username and password. Information on the status of commands and messages are provided in the central text box. User input is in the white text entry box and executed by pressing the submit button.

An example of the report of logging in :

The results of typing help:

and so on. To get the inventory you can issue "describe inventory". The system also accepts

The system recives events from the sim like what is being looked at.

meaning that the user is looking at the bot.

The whole point is to be something an AI running as an external process could use. To do this the system accepts commands via the socket it is listening to.

For testing we setup a file on a server with the commands to the lisp interperter XML encoded.

will execute any command-string you could execute manually from the client.

Another useful fragment to know is:

which means not to requeue this code fragment for later execution.

So the dotlisp equivelent of "Hello World" would be:

Which we then translate into XML and stick in a URL accessible file.

Using Putty we connect via a raw socket to the Cogbot server (in our case localhost:5555).

The system will return

To find out more about the lisp system see \cogbot\dotlisp\dotlisp.html The system should automatically load

At this time all the subprojects "aligned" to the point to allow Cogbot to function. OpenSim and OpenMetaverse are currently moving and OpenCog is being written. So there are many things that are needed besides just keeping up with new releases.

Working on the "heard" listener first by adding to Chat.cs:

when I say 'hi there' to the bot in-world cogbot returns to the tcp client:

This could of course be changed into calls like "(on_chat (fromName) message)" where "on_chat" is a lisp function, and could be redefined by the AI using Cogbot. Also such a function could translate into something like XML or use system provided methods to do so.

In general define all the events that occur, map them to function calls, then have a file for each type of message each type of client AI expects. So OpenCog would have one, OpenCyc its own, Soar its own, etc...

to the startup file causes the system to automatically login as it's first action after booting. This addresses the previous TODO but requires more lisp.

The simulator sends update messages to clients like TextSL or the Second Life viewer. The Cogbot hooks reception of these messages an updates the appropriate structures. The system can also add lisp code fragements to the queue for processing. The defintion of these functions/methods are in the cogbot.lisp file. The initial version simply maps the parameters into an appropriate message sent to the client AI.

Extra sensory input simply require adding more hooks and defining the functions. Note that reflexes could be implemented at this level as well as filtering.

What was sent to the AI socket

The Avatars_OnLookAt need to be captured and transformed. Then the system would be able to track objects being pointed to, like itself.