This page describes work in progress and planned work for an OpenCog-powered dialogue system.

There's a prototype chatbot, originally developed by Linas and recently updated by Rodas. It's very simple at the moment. It will connect to IRC (channel #opencog on irc.freenode.net as cogita-bot, and listen to mentions of its nickname (or cogita, or cog). It will acknowledge declarative sentences it is told, and it will answer Wh* queries based on what it has already been told. Work is in progress for truth value queries (is something true or false?) using the backward chainer.

The bot doesn't have the concept of chatting with specific people (nor does it differentiate between a single person chatting with it, versus multiple people). It just parses input sentences and, when those are questions, uses the fuzzy pattern matcher to answer them. Still, it uses our natural language understanding and natural language generation pipelines.

The architecture for the prototype chatbot is described here:

We have three processes, all communicating via sockets:

An interesting note is that the CogServer runs no MindAgents. Chatting is just done in a request-response way, and so this could all happen without the CogServer by running, for instance, a scheme server. All processing done inside the CogServer is done by a connection-handling thread launched by the NetworkServer -- see Poor man's multithreading via Atomese. In principle this means we could have parallel processing of multiple queries (but with confusing results given the lack of separation of interaction channels).

Over the next several months we plan to introduce many improvements to this application. Right now I'm more concerned with how they impact the architecture of single machine OpenCog than with the details of how the pieces will fit together, so this section will be brief (and someone is more than welcome to add details).

Execution management is probably not strictly needed, but this provides a good testing application.

Incorporating the improvements mentioned above means that a request-response model won't be sufficient anymore. We need multiple background processes: ECAN, reasoning, and OpenPsi. Currently, ECAN and OpenPsi are implemented through multiple MindAgents and ECAN, at least, is dependent on the notion of the CogServer cycle, although removing this constraint might be straightforward.

This suggests that the ideal architecture for the medium-term chatbot would be the (properly) multithreaded CogServer. In the simplest case, we'd create one extra thread dedicated to background inference, and run ECAN and OpenPsi through the existing scheduler.

As this requires only one extra thread, a quick and dirty solution would be to trigger the background inference dynamics via a connection-handling thread created through the NetworkServer. I don't know if this would work (would a long-running scheme function screw up anything?), but if it does, it's supported by the existing CogServer.

So an implementation plan for background dynamics might be:

We'd end up with an architecture like the one below: 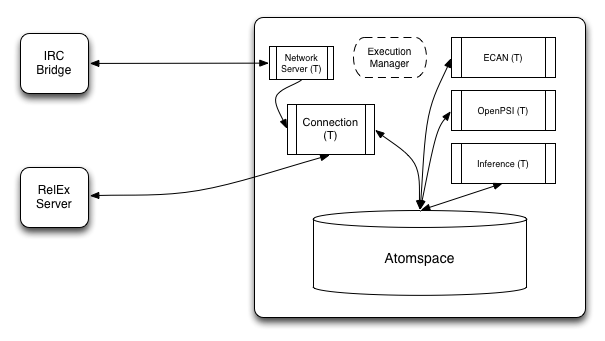 This plan doesn't cover Execution Management, as we still need a detailed design for that.

The chatbot application lends itself to a few architecture-related explorations that are fun to think about.

For instance, how would we scale this so we can have many chatbots running at the same time, or, more interestingly, the same chatbot running separate conversations? Scaling the bridge and RelEx is trivial, as it can be done horizontally. But scaling the bits that run inside the CogServer becomes less so, especially if we integrate a lot of background knowledge. Launching one CogServer per session becomes a memory hog. This lets us play with the idea of a distributed Atomspace and some of the thoughts being baked for Improving Single Machine Performance.

Another interesting idea is enabling multiple interaction channels inside one CogServer instance. This would require some sort of session identification in Atom form, to keep separate records of what's been said by each client. It would also further stress Execution Management with the need to handle a larger active schema pool.

Finally, we might have the idea of persistent conversations, in which the bot remembers each person and what has been said before. This is interesting from a MindCloud perspective, where many applications will have this requirement of storing and reloading a long term memory of past interactions with a specific user.