This page provides an overview of OpenCog, as it was envisioned in the 2003-2010 time frame. Ideas and priorities have changed since then, the the diagram below is no longer an accurate depiction of the system. This page is preserved for historical interest.

The term OpenCog Core is a mostly colloquial term used to describe the combination of an AtomSpace and a CogServer that together function as the kernel of a Mind OS, managing memory (knowledge representations), scheduling cognitive processes (MindAgents), and handling I/O.

The term is mostly synonymous with the term OpenCog Framework (although a software framework, by definition, also includes programmatic constructs and source code for developers to create applications), and historically has been called the core as far back as its Java implementation at WebMind Inc in the 1990s.

The term was later reused in the names c-core (for the C++ programming language rewrite of the WebMind Java core) and p-core (for a light-weight pseudo-core) at Novamente LLC.

The OpenCog Core began its existence as a refactored and simplified version of the c-core, the central component of the NCE and is now advancing rapidly through the collaboration of dozens of open source programmers spanning commercial, academic, and independent backgrounds.

A systems diagram illustrating how the OpenCog Core fits into the larger scheme: 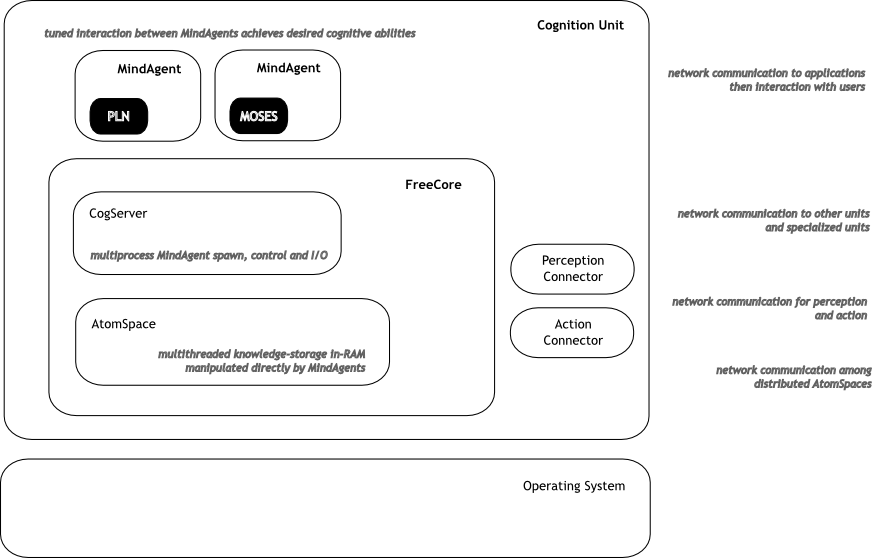 The OpenCog Core has also been called the free-core, because it rhymes with c-core and p-core.

Following these conventions, a multiple-Unit diagrammatic layout would be arranged with a horizontal bias.