The ImportanceDiffusionAgent treats the spread of importance as a diffusive process.

equal the "probability that Atom

((( Note: perhaps 0 should actually equal the attention focus boundary and atoms not in the AF should have their final STI increased the equivalent amount at the end. In this case we would be unable to directly use the vector of

's to set the STI after diffusion because "0" would equal "0 and below". Instead if an atom has 0 scaled STI, then the atom's end nonscaled STI would have to be set relative to it's previous STI.

Say that after diffusion X.scaled_sti = 0.2 This translate to 2. Because we conserve sti we can't set X.sti directly to 2 since it's previous sti is -1. Instead work out the absolute increase of a scaled sti going from 0 -> 0.2 and add this to X.sti:

is selected, given that

Then, we have a Markov matrix M...

but with the caveat that transition probabilities of HebbianLinks are only added to M if the source Atom's STI is sufficient for the selected spread decider to to return true. This is influenced by the parameter diffusionThreshold, which by default is the Attentional focus boundary.

This is necessary because InverseHebbianLinks are included in M by reversing the the indices i and j. Thus if there is a Hebbian link from

. If there were no diffusionThreshold, then atoms below the attentional focus boundary could steal importance if they had InverseHebbianLinks to those that were. Conceptually InverseHebbianLinks should only have an effect when they are above the attentional focus boundary... for an atom they say, "when I'm important, then this other atom isn't", rather than the more presumptuous "I'm always more important than this other atom".

To conserve STI, the Markov matrix then has to be normalised to a left stochastic matrix such that each column sums to 1. Here, another parameter is introduced maxSpreadPercentage which indicates the maximum percentage (from 0..1) of an atoms STI that it will give up (perhaps this is unnecessary, in which case it would equal 1).

Then the diagonal of M is set to (1-maxSpreadPercentage) and the columns totaled, i.e. let n be the vector whose entries are:

Then for each entry

Now each column of M should equal 1.

and set the STI levels relative to the entries of

If the interaction of the Atoms with the world don't change the HebbianLink strengths or systematically perturb the atom STI levels, the network will eventually settle to the fixed point of the Markov matrix.

The spread decision can be made in several ways, and can also be stochastic so that Hebbian links from a source with given STI will sometimes be included and sometimes not. 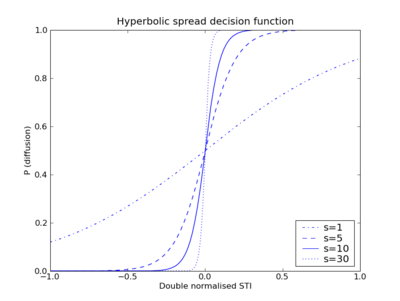 The hyperbolic spread decider is stochastic, and the probability of spread is:

is the attentional focus boundary also normalised from 0..1 and

is a shape parameter (higher s == more abrupt transition between 0 and 1 probability of spread as i increases).

The initial implementation uses the gsl::matrix class from GSLWrap. This can only work for a small AtomSpace, since gsl::matrix isn't sparse.

Boost provides a series of sparse matrices and simple operation on these.

Or work out how to carry out the same procedure without using a matrix, and instead calculating the values directly from the AtomSpace... which may be slower but have less memory requirements.