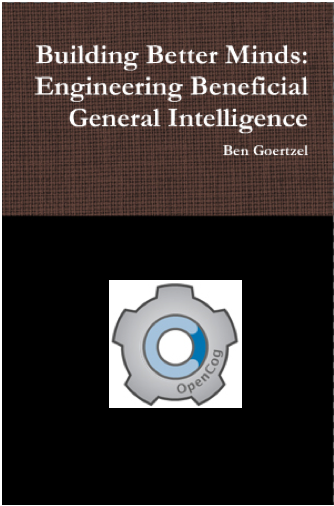 Building Better Minds, by Dr. Ben Goertzel with co-authors Cassio Pennachin and Nil Geisweiller (and many other co-authors for particular chapters), is a book with the simple objective of explaining "how to build a thinking machine." It began as a single volume but has now split into

Note: the image to the right was created "just for fun" before the book was split into two volumes and the co-authors were added. The real cover design is still unknown.

More specifically, the book deals with: how to create an intelligent software program that, running on a distributed network of current-quality multicore servers, will display general intelligence at the human level and ultimately beyond.

Some chapters of the book deal with mathematical and software engineering details; others will be comprehensible the educated layperson with the dedication to absorb a network of complex and original ideas.

Much of the book comprises updated versions of material that already exists on the OpenCog wiki site or in Dr. Goertzel's prior publications; but there is also a significant amount of original material.

The book is expected to be released in 2013. A complete draft now exists and is being bug-checked.

A preliminary table of contents for the book is at:

Errata and comments for a privately, very narrowly distributed draft version of the book are here:

(a link only useful to those looking at that draft)